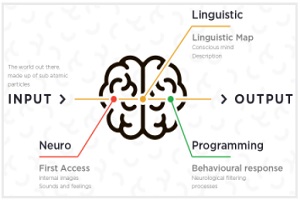 Neuro-Lingustic Programming (NLP) is one of the fastest growing techniques used in clinical psychology today. NLP is at its core is a means of self-improvement, but it has many other uses as well; in learning how to manage environmental and invisible illnesses and better communicate your issues with doctors and other medical professionals, for example.

Most would admit that some people appear more "naturally" gifted, competent or confident than others. NLP allows us to look at what people we admire and aspire to be like do differently to us, and then use a variety of practical skills to model their behavior in ourselves. Many people in positions of power, such as politicians or business leaders have either been trained in NLP techniques, or they simply have the naturally ability to use them, making them excellent communicators and influencers.

NLP can be described as the art and science of excellence, derived from the study of how top people in a range of different fields are able to obtain their outstanding results. There is a core focus on communication skills in NLP and these can be learned by anyone in order to improve their effectiveness, both personally and professionally. In the context of this website, our focus is on using positive forms of psychology to manage and recover from environmental and invisible illness. So, our focus is on how NLP can help us personally to better communicate with those who may be able to help us, from doctors and healthcare professionals, to local government dealing with disability claims, and even our family and friends.

NLP.com provides us with a very simple and succinct definition of what NLP is:

NLP stands for Neuro-Linguistic Programming. Neuro refers to your neurology; Linguistic refers to language; programming refers to how that neural language functions. In other words, learning NLP is like learning the language of your own mind!

The generally accepted consensus is that NLP started in the early 1970’s in Santa Cruz, California, when Richard Bandler, a 20-year-old psychology student at the University of California, Santa Cruz, met and became friends with Dr. John Grinder, who was in his late 20’s and an associate professor of linguistics at the college. Bandler started out as a student of mathematics and was also studying computer science. He eventually became more interested in the field of bahvioral science and switched his major. NLP is often said to have originated through computer programming and linguistics.

Bandler and Grinder became partners, and began to study the principles that governed the structure of language. They wanted to define the techniques and skills used by successful psychologists and other therapists.

It is often noted that NLP shares a lot in common with clinical hypnotherapy, and this is no accident. Modern hypnotherapy is essentially based on the work of Milton H. Erickson and both Bandler and Grinder developed a fascination with his work. As such, they incorporated Erickson’s manner of conversational hypnosis into the NLP. Communicating to the unconscious using “artfully vague” techniques while doing away with authoritarian suggestions. Erickson focused on building rapport and meeting the person in their model of the world to remove resistance from the unconscious. Erickson’s techniques thus became a core part of NLP and this is known today as the “Milton Model". This model is used widely by NLP Practitioners and Trainers with their students and clients and forms the basis of many NLP training courses, as does a thorough understanding of hypnosis and hypnotherapy.

NLP has grown and developed rapidly since its inception by Bandler and Grinder and has been further refined by many skilled individuals. Person's of note include Leslie Cameron Bandler, Robert Dilts, Judith DeLozier, and David Gordon.

NLP provides a model of how a person structures their own unique experiences of life. What NLP provides is a set of models, skills and techniques for thinking and acting effectively in the world (self-improvement). The purpose of NLP is to be useful, to increase choice and to enhance your quality of life (QOL - often seen in medical studies). It goes without saying that those affected by environmental / invisible illnesses would want to increase their quality of life, and NLP is one of many forms of positive psychology that can help them (or you) achieve this.

We can look at the process of NLP as:

NLP, much like hypnotherapy, aims to work on changing preconceptions held in the unconscious mind in order to alter (for the better) how we think and behave consciouslly. So, NLP is a set of techniques to help us uncover what we have learned in the past, unlearn unhealthy or undesirable thoughts and behaviors, and relearn new ones that better serve our goals in life; in the case of most reading this, these goals will focus on learning to better manage environmental / invisible illness symptoms, or set you on a path that will ultimately lead to recovery, health, happiness and wellbeing.

A qualified and professional NLP practitioner will first look to establish rapport with their client / patient, much as a hypnotherapist would do. Only then can the real work begin since rapport is so important to accessing the unconscious mind of the individual, and this is where genuine positive changes can occur.

An NLP session or training will introduce the concept of the Present State and the Desired State. This is simply reiterating the short description above in NLP "jargon". We all have thoughts, feelings and behaviors in our Present State, and if we have sought out NLP, we no doubt wish to change these as they are causing us discomfort, pain, suffering, or not producing the results in life that we desire. The aim of NLP is to access the unconscious mind as a means to alter these thoughts, feelings and behaviors until we achieve our Desired State. In the case of environmental / invisible illness patients this Desired State would likely be health and wellbeing, or at least the ability to accept ill-health but manage it effectively and live happily and productively regardless.

NLP is a goal-orientated set of techniques that can be learned by anyone wishing to better themselves or overcome thoughts, feelings and behaviors that are limiting their health, happiness and limiting their potential in life.

For someone struggling with environmental / invisible illness it offers a host of benefits that can make life worth living again. Through NLP you can get yourself out of the inevitable rut that these dreadful illnesses have put you in and give you a new, more positive outlook that has unlimited potential to lead you to a healthier and happier future.